Review by Elijah Martin
3.9
All trademarks belong to their respective owners. 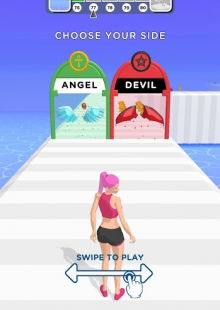 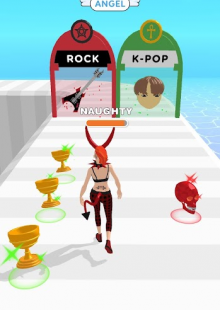 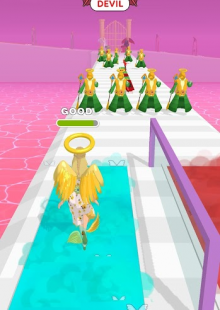 Many mobile gamers play to take their mind off the routine of the day and even to calm their nerves after hard work. Simplicity and unique gameplay are what you can say about Destiny Run. It is a casual action game that gives the player a choice similar to a real-life one. You can become an angel and a demon that symbolizes good and evil. Which side will you choose? To become a full-fledged creature, you have to go through many levels and tests. Destiny Run Mobile is available for download on both Android and iOS platforms.

Destiny Run is definitely not known for its graphics because the game is executed in a very simple 3D style with a small amount of detail. But that doesn’t mean it doesn’t have its charm. The characters, objects, and background of the game have a simple but bright appearance. The stylistics of the game is what many like in this game. You can play as a devil in a punk rocker costume and an angel in a cute outfit, which attracts the attention of many players.

The girl who is the main character of the game may have been anyone in her lifetime. But her main concern from now is to choose between the two sides that will affect her appearance and gameplay. At the beginning of the game, you have to decide whether you want to be an angel or a demon. Depending on the look you like, you will collect items on each level. You’ll know right away what you have to collect because the needed items have a certain color.

Interface and character management are quick to master because you only need to perform a few actions to succeed in the game. It is enough to carry a finger on the screen to collect the right items and evade those that may cost you your life. Above the character’s head is a scale that serves as a hint to view your progress at the level.

Celestial Gate is a checkpoint in Destiny Run where the player saves progress and move to a new level. Two creatures in front of the gate will decide whether you have done enough good or evil. After successfully passing the level, you can see how many tokens you have collected.

The main feature of this game is the possibility of infinite play, but for many, it can become something boring. The game is very replayable because users can play as much as they want. It would be better if there were more gameplay-inspired content in the game.