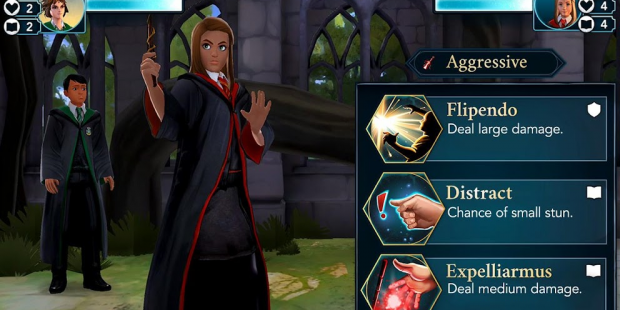 Harry Potter: Hogwarts Mystery is a role-playing game and puzzle video game based on the Harry Potter series of novels written by J. K. Rowling. It was developed by Jam City and published by Portkey Games, a label under Warner Bros. Interactive Entertainment, on April 25, 2018, for iOS and Android mobile devices. The game was announced on December 21, 2017, and was developed under license by J. K. Rowling's Pottermore and its story is set in the time period before the events of 2007's "Harry Potter and the Order of the Phoenix".

In this game, you can choose your own gender and house. You are not Harry Potter. There is a story that is based on the original series by J. K. Rowling. You go through the years of Hogwarts, complete missions, brew potions, and more!

In Harry Potter: Hogwarts Mystery, you play as a Hogwarts student. You go through the years of Hogwarts and complete missions, brew potions, and more!

When you start the game, you are sorted into your house and are given a wand by Professor McGonagall. This wand will be the only wand you use in the game.

The game has 3d graphics but they are not very detailed. The characters and creatures are drawn in a cartoonish style and are not as detailed as they are in games like Monster Hunter: World or Final Fantasy XV Pocket Edition. The game's graphics are like the graphics in the storybook. The graphics are not that realistic.

The game itself is not boring but I doubt someone would want to play it a second time. It just isn't meant for replaying, unless you want to get into a high score board or something. It is good for one-time playthrough.